Some years ago, when I was training to be a spiritual director, it was noted at one point, that I often spoke in metaphors. A dictionary definition of metaphor is “an imaginative way of describing something by referring to something else…figure of speech in which a term or phrase is applied to something to which it is not literally applicable in order to suggest a resemblance”. At the time, I was playing the role of a directee, and a fellow trainee was the director and I had just shared a story about a rose I had seen on my daily walk, and the memory it evoked of my father’s death and his rose garden. That then became a story of love and resurrection, and above all, God. Further reflection revealed to me that I do, indeed, use metaphors in my search for God and meaning in my life.

In the introduction to her beautiful  book Ordinarily Sacred, Lynda Sexson states that “this book  attempts to illuminate the sacred quality of experience which on the surface is considered mundane or secular”. Sexson goes on to say

In order to do so, I have drawn on the most slender and ephemeral of our everyday experiences, which nevertheless resonate with the most profound of religious symbols. This is the work and nature of metaphor, a quality of experience manifested here by the little things we save – the “stuff” in children’s boxes, by the things we say that get repeated – our texts of our lives, by our jokes and our dreams, by the way we play.

In their latest book, Aging with Wisdom and Grace, Wilkie Au and Noreen Cannon Au, describe faith as trust, and they note that “metaphors can make this aspect of faith come alive”.

Just over twelve months ago, I was at a low point in my life. I was midway through the 2019 Tertian retreat at the Maroochydore parish on the Queensland Sunshine Coast. I always look forward to these retreats and the sense of joy, pleasure and consolation they provide for me, and in particular, this time I would be by the ocean, where God speaks loudest to me. At that time, however, those feelings were missing. The days were long and the three hour round trip each week seemed like an eternity. I had recently had my annual blood test and soon all was revealed. I received a recall message from my GP re the blood test results and several tests and scans later, I was diagnosed with Graves disease, an autoimmune disease that attacks the thyroid. Thus began a challenging six months that would involve many tests and scans, twice-weekly blood tests and radioactive iodine treatment. In the midst of this, an early scan revealed a very large hole in my heart and further procedures were ordered and carried out. Surgery would be the outcome.

As the last day of the retreat approached I was feeling more and more exhausted and looking forward to finishing. After lunch we went for one final walk on the beach and as I often do, I bent to pick up a stone, glistening in the sunlight and half buried in the wet sand. This was only days after I received the news about my heart defect and its surgical outcome. 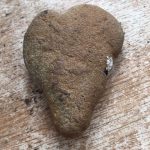 As I washed the sand off the stone in an incoming wave, it revealed itself to me – a perfect heart-shaped stone. As I held it in the palm of my hand, I was at once speechless, overcome, but filled with hope and gratitude. This stone, ‘my stone’, would become  my metaphor for faith as trust and it did indeed make this aspect of my faith come alive. As I held that stone my thoughts turned to one of my favourite Isaiah verses: “See, I have inscribed you on the palms of my hands”. (49:16)

As the months passed and the Graves disease held me in its grip, I put my trust in the comfort of being held in the palms of God’s hands. Music also sustained me and faith as trust was revealed in Matt Hammett’s song, Trust with its words:

You gave me everything I have

And my whole life is in Your hands

When what I fear is closing in

Lord, Your faithfulness will never end

Your faithfulness will never end

I will trust you, Lord, with all my heart

And I won’t forget how good you are

No, I won’t forget how good you are

My cardiac surgery was put on hold until the Graves disease was under control but at last I received the go ahead and in May this year I was admitted to hospital for a final round of testing and then surgery to close the hole in my heart and repair a damaged valve. The evening before admission, I went to the sea, where God speaks loudest to me. I walked along the pier, listening to the slap of the waves, Benedictus played on my iPod and high above me shone the Southern Cross. An enormous sense of peace and trust in God enveloped me and I knew that all would be well. And all was well!

Tonight, for the first time, I returned to the sea to give thanks. As I walked along the foreshore, on the ground ahead of me I came across chalked hearts, leading to three chalked messages: choose gratitude; be thankful; never give up. As was the case 14 months ago on the beach at Maroochydore, I was at once speechless and overcome, but filled with gratitude for these peculiar moments in my ordinary life. Saturated by metaphor and personal symbolism-making, they illuminated the sacred quality of my experience of love, trust and resilience over the past year. 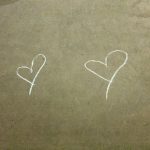 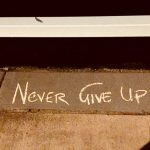 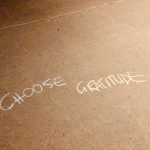 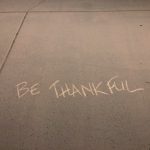