EARTH IS GOD’S HOME TOO

To Commit Or Not To Commit – That Is The Question

EARTH IS GOD’S HOME TOO

Early on Monday morning of the Anzac weekend (while many of you may have still been in bed) Debbie dela Paz and I (with 140 others) attended a webinar sponsored by CLC on the follow up to the Amazon synod held last year. The host of the meeting was Ann Marie Brennan, the Vice-President of World CLC, and one of the speakers was the ex-President, Mauricio Lopez Oropeza – Director of REPAM (Rede Eclesial Pan-Amazónica, or Pan-Amazonian Ecclesial Network). He was joined by Maria Luisa Mendonça – Co-Director of Brazilian Network for Social Justice and Human Rights. The occasion was the 50th anniversary of Earth Day (when we put out our night lights).

The Amazon basin, we learnt, is not a space empty of humans, to be exploited. Around 3 million people live in it, among them indigenous peoples. Just like our First Nation Peoples 200 – 100 years ago, they are being eradicated. One tribe that used to have 50,000 members has now only 1,000. Not to mention the loss of habitat for thousands of other animals and plants.

While the Western world focused on the question of women deacons and married priests in the synod, what was of more significance to the local people of the Amazon was the message that they and their land is sacred and need to be protected from heedless exploitation by multinationals and the consumers like us who buy their products.

What Maurizio emphasised was that there is an ‘Amazonia’ in every region of the world. We don’t have to get involved in that particular campaign for justice. I thought that here in Australia there are places of natural value in each state under threat, like the site of the Adani mine where the First Nations have recently been refused access to their own land.

Another point that Maurizio highlighted was the singular importance of ecological conversion. No documents or political action is going to achieve the aim of restoring the balance of life on this planet without people having a change of heart in their relationship to the environment. ‘Laudato Si’ is as relevant a call to conversion as it was when it first come out. The document of the synod on the Amazon, ‘Querido Amazonia’, continues this call for conversion (ecological, pastoral and cultural).

As Pope Francis has said, Earth is not just our home, it is also God’s home. I hope we can continue to reflect, pray, and form actions to make this planet more homely to the thousands (millions) who are being forced off their land. Today, as Catholics, such action is probably the most gospel oriented that the Church can offer the world.

Here is a detailed report on the violence committed in Latin America against defenders of the tribal peoples and their territory. https://social.org.br/index.php/artigos/artigos-english/230-environmental-defenders-often-fighting-agribusiness-are-being-violently-silenced-around-the-world.html One action we can take for the Amazon is to write to the Dept of Foreign Affairs asking them to send a message to President Bolsonaro of Brazil to protect the Amazon rainforest and its custodians. https://www.foreignminister.gov.au/   (see https://www.nytimes.com/2019/08/27/world/americas/bolsonaro-brazil-environment.html ) 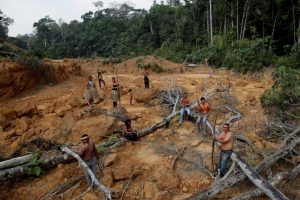