CLC BAIRNSDALE IS SEEKING YOUR HELP

At the beginning of our October NEXCO meeting in Melbourne, a special celebration was held in recognition of the 25th Anniversary of the CLC/Jesuit Tertian Retreat Project. This collaborative project has been an opportunity to reach out together to rural and remote areas of Australia and spread God’s word through Ignatian Retreats in Daily Life and more recently through FSE retreats. We in CLC  have valued this opportunity greatly and wished to publicly thank the Jesuits  and to acknowledge the blessings that have resulted from this project.

Jenny Gardner, National President of CLC gave a short history of the project since its inception. The retreats began from a conversation in 1993 between Fr Gerald Coleman SJ the tertian master at the time and Mary Nolan, President of CLC. A trial 3-week retreat in daily life was held in country Victoria in Ballarat. The following year 1994, based on that experience, CLC and the Jesuit Tertians collaborated to offer the 3-week retreat in daily life to other country areas where there was a CLC person who could coordinate. A lot of work went into communication and preparing the coordinator in each area. In following years other parishes were included, always with a Jesuit Tertian and CLC or nominated coordinator. Eventually the FSE became the basis of the retreat with prayer guides being FSE trained. But it has followed a similar format for the past 25 years and has had an untold effect on formation across all states in the wider church.

Special thanks were offered for the Tertian Masters Fr Patrick O’Sullivan SJ, Fr Adrian Lyons SJ, Fr Brian McCoy SJ and Fr Steve Curtin SJ and for the CLC Co-ordinators including Mary Nolan, Kay Hooper, Felicity Flynn and Noreen Nicholson. In recent years CLC has also worked closely with Fr Michael Hansen SJ and Frances Tilly and grateful thanks were given for them.

Over the years CLC members have not only been part of offering the retreat, but have followed up after the retreats and established groups to give people an ongoing experience of Ignatian spirituality. Some of these have become CLC groups and some prayer groups. They have certainly provided ongoing nourishment to people in their faith. In this year, 2019, 344 people registered for the retreats with 9 tertians and 14 CLCL’ers.

Lastly, a framed certificate was presented to Fr Brian McCoy SJ, Provincial of the Society of Jesus to mark the occasion, Frances Tilly presented gifts to CLC and the Jesuits, a special celebratory cake was cut and those present enjoyed morning tea together.

It was an important acknowledgement of a great collaboration. 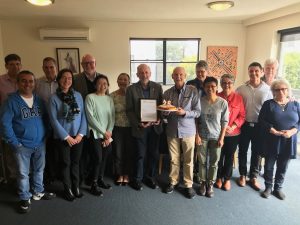 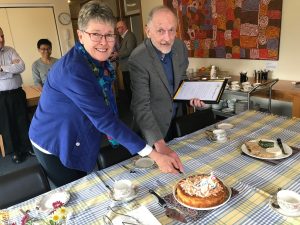